I just want to spread the word from my other blog.

Anne Graham Lotz said that it's not a matter of IGNORANCE but INTOLERANCE that is making our society turn away from the TRUTH. In a place where Christ and the Church is accessible, no one really has the grounds to say that he or she was not presented with the gospel. In New York City alone, hundreds of people volunteer to distribute tracks and talk about the love of God in the subway station. Although some people can be harsh and direct to the point, the news is out. The truth hurts and Christianity should not have to apologize for that. "We've reached the point as a nation - and as a church - where we are scared to offend anyone. We want to be accepting. We want to be open, non-judgemental, nonconfrontational, and inonffensive. But listen carefully: The church of the LOrd Jesus Christ offends by nature. Either we will offen almighty God by living in rebellion, or we will offen the wicked who walk in darkness." (Charles F. Stanley) 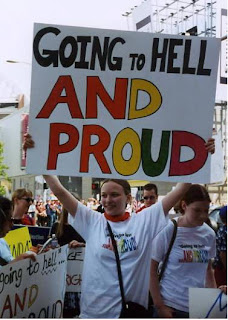 I can't blame this lady who is, well, pretty much CRAZY to even raise that slogan up high.  Many people would rather go for what is convenient than the high road. Many religions exist and the last thing anyone would want to hear is a religion that claims to be the absolute truth. But we as Christians, are passionate about what we believe. Aside from being commanded by Jesus to spread the gospel, we CARE to share it because HELL is REAL. Hell is not beautiful.

I wish people will look deeper into what Christianity is all about. Christ came to show us our dire need for a Savior. We are so messed up and our shortcomings are illuminated each time we draw nearer to the Father. I know we are to practice what we preach, but we can never be perfect and we will always fail. Look at the characters of the Bible, not one lived a sin-less life to the end. Solomon, David, Moses! They all sinned. We are fallen and unbelievers will never understand that. I am aware of believers who are irresponsible to conduct themselves in a manner that's not worthy. I am also aware of believers who try to shove the truth in people's throats when their lives are not even in check. But see, that's the reason why we, as sinful as anyone, cling on to Christ. It offers hope for what is bleak and completely lifeless. We cling to it because it's the source of what the world doesn't offer.

We do say that Christianity is the TRUE religion, because it is! The Bible can't be denied. It's existence cannot be denied. It contains historical events and names of people from centuries ago. The apostles wouldn't give up their lives for something mythical. They saw something and believed in it.
God lowered Himself to where we are at. It's just beyond our imagination that a God would do such a thing. Movies and cartoons and other media productions have made it fantastical as to what kind of king we should bow down to. They have made us believe that a GOD who saves has to be magnificent, bright, and SHINY. That's what people think Jesus should have been... But He did not. He was like us and a carpenter. He was born in a manger and God lowered Himself as a sign of pure love. Love that He is able to sympathize with us. He understands us.

If this kind of love is not worthy to be honored, I don't know anything else greater.
at 12:10 AM 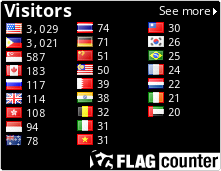